Travelling in India, a country for trains |

If there is an iconic image of travelling in India, it is surely that of a bright coloured train packed with people, going across places of scenic beauty that appear straight out of a movie.

This is the railway scenario in India: trains and more trains that go all over the country, covering short, middle and very long distances. 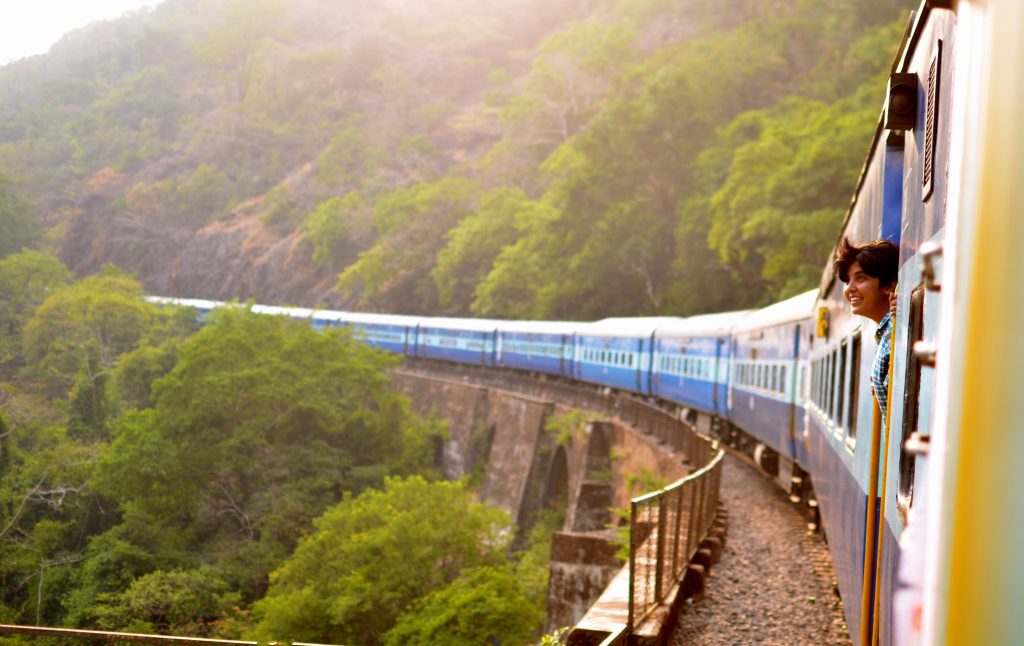 India has one of the largest railway networks in the world, carrying nearly 25 million passengers daily. The Indian Railway Catering and Tourism, a state-owned company, is one of the world’s ten largest employers.

At a time when the industrial era was in full swing and India was a British colony, the first railways were introduced in 1853, using the knowledge and expertise of British engineers.

It soon became clear that the country’s long distances and difficult roads made it the ideal candidate for championing the development of a railway network, which currently runs across the length and breadth of the country and constitutes an integral part of its landscape, its iconography and its idiosyncrasy as a nation.

Coaches are divided into several categories: first, second and third classes, all of them air- conditioned (the heat in some parts of India can be suffocating) and with the comforts expected from a “normal” train. Depending on the trains, there are other categories such as Executive. Below these, you have the Sleeper class, with fans, ready to be boarded with sleeping bags, followed by the Chair Class and finally the Second Sitting.

The last three categories are not suitable for those who expect freedom of movements or for neat freak travellers. You can’t expect neat toilets and you’d better be prepared to experience the overpowering smell of humanity. The classic pictures of trains packed with people sitting on benches, luggage racks, floors, toilets or even train roofs are not cinema fables but daily sights in India.

Train tickets are really cheap. Some social groups, such as the nomad Sadhus monks, are allowed to travel for free (and even smoke marihuana legally). Journeys are extremely long and some of them are listed as world heritage sites, such is the case of the mountain railways of   Darjeeling, Nilgiri and Kalka-Shimla.

Buy with precaution, use with cunning

You can buy your train tickets online for most journeys but, like everything else in India, there are more “creative” and cunning ways to board a train paying less and enjoying free last-minute services. A good way to get familiar with it is to take advantage of your status of foreigner: you are entitled to use the ticket offices reserved for pregnant women or people with reduced mobility, which means skipping long queues when buying your ticket. Sneaking on first class coaches after buying third class tickets… is something we cannot explain, but you might learn how to go about it soon enough. Will you tell us when you are back?

Enjoyed this article? Get your Indian E Visa and make some great experiences in India.